View source
watch 01:36
We're Getting Mutants in the MCU - The Loop
Do you like this video?
Play Sound

Olympus Has Fallen is an American action thriller film. The film is the first installment of the Has Fallen film series and was theatrically released on March 22, 2013.

After a failed attempt to save First Lady Margaret Asher, disgraced Secret Service agent Mike Banning must take action after a North Korean terrorist group captures the White House. Working with national security, Mike must use his inside knowledge to rescue President Benjamin Asher from his kidnappers.

U.S. Army Ranger Mike Banning is the lead Secret Service agent assigned to head the Presidential Detail. He maintains a personal, friendly relationship with U.S. President Benjamin Asher, First Lady Margaret and, especially, their son Connor. During an evening drive from Camp David to a campaign fundraiser on December 25, 2011, a tree branch falls and strikes the front of the president’s convoy, making the vehicles skid out of control on black ice on a bridge. The lead vehicle crashes through the guard rail and falls into the icy river below, leaving the presidential limousine teetering on the edge of the bridge. Mike is able to save President Asher, but Margaret and two other agents die when their vehicle falls and crashes.

Eighteen months later, on July 5th, 2013, Mike works at the Treasury Department, within sight of the White House, having been removed from the Presidential Detail because the sight of him triggers Asher’s memories of the night Margaret died. During a political meeting between Asher and South Korean Prime Minister Lee Tae-Woo, North Korean-led guerilla forces, under the guise as local garbage services and a crowd of tourists, mount an air and ground assault. Aided inside the White House by treasonous members of Prime Minister Lee’s detail and Dave Forbes, an ex-U.S. Secret Service agent turned private contractor, and aerial cover fire from a US military gunship, the attack results in the eventual capture of the White House. Asher and several top officials are held hostage in the White House bunker, where Prime Minister Lee is killed. Before he is also killed, agent Roma alerts the Director of the Secret Service Lynne Jacobs that “Olympus has fallen”.

The attack was masterminded by Kang Yeonsak, a North Korean ultranationalist who appears to be motivated by hope for a reunification of Korea, seeking to use Asher’s hostage status as leverage to force U.S. officials to withdraw USFK forces from the Korean Peninsula, allowing the civil war to end. He also seeks to destroy all of America’s nuclear weapons in their respective silos spread across the country, turning the United States into an irradiated wasteland as revenge for the deaths of his parents, as his mother was killed by an American landmine and his father was executed for crimes against North Korea. To accomplish this, he requires access to Cerberus: a fail-safe device that self-detonates any U.S. nuclear missiles during an abort, the access codes of which are held by three top government officials within the bunker, including the President. Asher orders the other two officials to reveal their codes to save their lives, certain that he won't give up his code.

During the assault by Kang’s forces on the front lawn, Mike joins the White House’s defenders. He falls back into the building, disables the internal surveillance and gains access to Asher’s satellite phone, which he uses to maintain contact with Jacobs and Speaker of the House of Representatives Allan Trumbull, who is now the Acting President. Authorized to proceed, Mike’s first act is to save Connor, who Kang plans to use to force Asher to reveal his Cerberus code. Despite resistance, Mike finds Connor hiding in the hidden tunnels behind the Lincoln Bedroom walls, thanks to the training Mike had given him before, and sneaks him out of the White House before beginning reconnaissance and reducing the terrorists’ numbers one by one. This includes Forbes, but not before Mike convinces Forbes to report to Kang that he killed Mike. Meanwhile, Army Chief of Staff General Edward Clegg convinces Trumbull to order an aerial SEAL assault on the White House in an attempt to enter through the roof and shut down Cerberus, but Kang’s team deploys an advanced anti-aircraft remote gun system called the Hydra 6, a fully automated weapons system capable of seeking targets independently. Discovering this, Mike advises Trumbull and Clegg to abort the mission, but it proceeds and the Hydra 6 annihilates all but one of the six helicopters before Mike can stop it. Kang retaliates for the attempted infiltration by killing Vice President Charlie Rodriguez on an open line to the Pentagon crisis room.

After Mike disables Kang’s communications, Kang tries to execute Secretary of Defense Ruth McMillan outside the White House in front of the media, but Mike's intervention allows her to escape and he takes out several more of Kang’s men in the process. With Kang’s forces dwindling, he fakes his own death as well as Asher’s by sacrificing several of his men and the remaining hostages. However, Mike believes that Kang has faked his death and he believes he will attempt to sneak away. Kang eventually cracks Asher’s code and activate Cerberus. As Kang attempts to escape with Asher, Mike kills the remaining terrorists, but Asher is shot by Kang in the stomach when he tried to fight Kang. Mike kills Kang by stabbing him in the head with a knife after overpowering him in hand-to-hand combat. Mike disables Cerberus with the assistance of Trumbull with only seconds to spare. During daybreak that day, Mike walks out with Asher and is received by the soldiers posted to await their arrival. Sometime after the events, Washington recovers from the attack and Mike once again becomes head of the Presidential Detail with him, Jacobs, Clegg, and Connor observing President Asher as he addresses the public.

Opening Credits to the Film

Italian poster for the film

Promo for the Spanish translation (Ataque A La Casa Blanca)

Cast and Crew at the film's premiere party 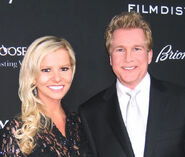 Writing team Katrin Benedikt and Creighton Rothenberger arrive at the premiere of the film. 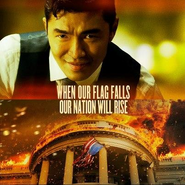 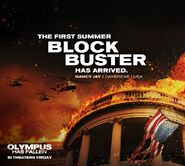 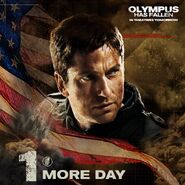 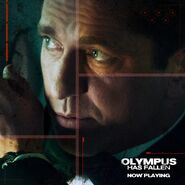