London Has Fallen is a sequel to Olympus Has Fallen. It is the second installment of the Has Fallen film series was theatrically released in the United States on March 4, 2016.

During the funeral of a British Prime Minster in London, the city is swarmed by a terrorist army and becomes the site of a series of devastating terrorist attacks masterminded by a Pakistani terrorist leader and his son. When President Benjamin Asher gets kidnapped by the terrorists, Secret Service agent Mike Banning must once again save President Asher and thwart the President's live execution.

Arms dealer and terrorist mastermind Aamir Barkawi is reportedly responsible for a series of bombings around the globe. Western intelligence locate his compound and the United States launches a drone strike against it, supposedly killing Barkawi along with his family, However, Barkawi survives and sets plans in motion with his son Kamran for revenge.

Two years later, U.S. President Benjamin Asher and his top Secret Service agent Mike Banning are jogging together. Mike is expecting his first child with his wife Leah and hopes to take some time off to spend time with his family, while contemplating resigning from the Secret Service.

Asher and Mike are informed that the British Prime Minister James Wilson has died. They and Secret Service Director Lynne Jacobs travel to London to join all the other world leaders for Wilson's funeral. As they are all arriving, several mercenaries under Barkawi's commands initiate an attack, starting with a bomb destroying the Canadian Prime Minister's limo. Soon, the mercenaries disguised as royal guards and police officers begin opening fire on civilians and other officers. Mike takes Asher and Jacobs with him to safety after a street chase. During the attacks, the world leaders of Germany, Japan, Italy, and France are also assassinated.

Quickly, the terrorists start to hit London's landmarks, including setting off a massive explosive on the River Thames that heavily damages Big Ben and the Parliament building. Mike, Asher, and Jacobs head to Marine One for extraction. However, men positioned on building rooftops launch stinger missiles at the chopper, taking out the decoy choppers before striking the presidential one. The presidential chopper crash-lands to the par, resulting in Jacobs being fatally impaled; she dies in Mike's arms after making him promise to kill those responsible for the carnage. Mike and Asher then go on the run. The President's staff sits in horror, fearing that their friends are dead. Mike attempts to contact Vice President Allan Trumbull back at the White House and send a message to let them know that he and Asher are still alive. As Mike and Asher are running through the Underground tunnels, Asher notes that the terrorists want him dead, and if it must come down to it, he orders Mike to kill him. Mike reluctantly agrees.

The staff receives a threatening call from Barkawi in Yemen to let them know that he is out for vengeance. They are informed that Wilson's autopsy report detected poison in his body and that he was intentionally murdered with the plan to lure the world leaders. With the city on lockdown, Mike and Asher run to the safe-house of MI6 agent Jacqueline "Jax" Marshall, whom Mike knows well. Jax gets onto her computer and learns that Barkawi is behind the whole plot. She plays back a message from Trumbull confirming that they received Mike's message and are sending help. On the security cameras, the three see what is supposedly the Delta Force team there to rescue Mike and Asher, until Mike notices that the men are not sweating despite wearing heavy gear and deduces they are yet more terrorist impostors, making them realize the terrorists intercepted their message. Knowing that the terrorists must have a mole within the British government, Jax heads to Scotland Yard to coordinate with local authorities while Mike stays behind to eliminate the terrorists, aided by Asher. The pair then take an MI6 vehicle and make a run for the safety of the U.S. Embassy, but are overturned by a van driven by the terrorists. Banning regains consciousness just in time to see Asher being abducted.

Asher is taken to a private location where Kamran is setting up for the public execution. Meanwhile, Mike is already on his way to rescue him with a regiment of Delta Force and SAS commandos. The terrorists set up the camera and broadcast it to every network around the world. As Kamran readies his machete to decapitate Asher, Mike bursts in. He engages in a fistfight with Kamran, but the latter manages to escape Mike ordered SAS commander Will Davies to trigger the explosives before taking Asher and jumping down a shaft as the place goes up in flames, killing Kamran and the remaining hostiles. Davies and his team report to the White House staff that Mike and Asher are alive. Jax discovers that MI5 Intelligence Chief John Lancaster is the traitor who helped Barkawi and the terrorists and kills him in self-defense when the latter refuses to surrender. Barkawi's compound is located in Yemen, where another drone strike is launched against him. Trumbull contacts Barkawi by phone moments before Barkawi dies in the explosion.

Two weeks after the London attacks, Mike returns home and spends time with Leah and their newborn child Lynne, named after his late boss. He then sits in front of his laptop and continues to contemplate about sending his letter of resignation to Asher. On TV, Trumbull speaks regarding the recent events, leaving an inspiring message that America will prevail. This convinces Mike to delete the letter. 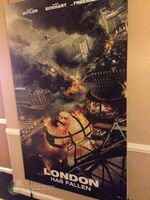 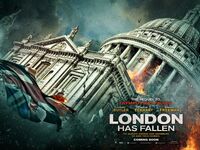 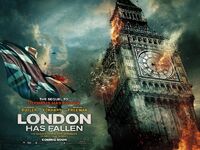 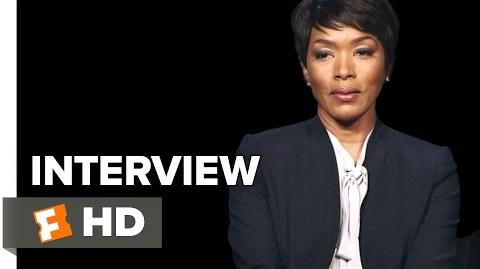