The Koreans for United Freedom, also known as the K.U.F., was a North Korean paramilitary terrorist organization that wanted the United States of America to pay for what they considered unreasonable and a threat to society after the U.S. tried to assist with the growing conflict between the North and the South sides of Korea.

The organization was conceived sometime during the twenty-first century and how it managed to enter the shores of the United States is still unbeknownst. Whether the various militia that made up the countless legions of terrorists were either former soldiers of the North, mercenaries, or a mixture of both is up for debate.

They disguised themselves as tourists and garbage workers to initiate the White House Siege. It also managed to blend into the South Korean government, with many K.U.F. members disguised as members of the South Korean security detail. The organization consisted of over 40 commandos.

Its goal was to unify the Korean Peninsula by attacking and capturing the White House and coercing the U.S. officials to withdraw the U.S Navy's Seventh Fleet from the Sea of Japan and 28,500 U.S. soldiers that were defending South Korea from the DMZ which would lead to a North Korean invasion of South Korea. The organization also secretly intended to use a highly classified fail safe protocol called Cerberus to detonate the entire American nuclear arsenal in their silos, which would destroy the U.S. and drastically weaken military support for South Korea.

At the end of the White House Siege, the terrorist organization was rendered defunct after Kang Yeonsak and all members were killed.

To see other members of this terrorist organization, please see the list of unnamed terrorists. 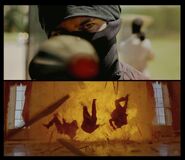