Has Fallen Wiki
Register
Don't have an account?
Sign In
Advertisement
in: Characters, Olympus Has Fallen characters, Males,
and 7 more

Leader of the KUF

"There is a saying is Korea. Saying something a hundred times is not as good as living it once."
―Kang Yeonsak saying to Ruth McMillan [src]

Kang Yeonsak (August 12, 1976 – July 6, 2013) was the leader of a North Korean terrorist group called the Koreans for United Freedom. He is the main antagonist of Olympus Has Fallen.

He masterminded the takeover of the White House in order to unify Korea and turn America into a nuclear wasteland using a top secret fail-safe protocol called Cerberus, but hadn't counted on Secret Service agent Mike Banning sabotaging his plans.

As a child born on August 12th, 1976, Kang Yeonsak and his mother were brought across the Korean Demilitarized Zone shortly after his father was executed for crimes against North Korea. However, while attempting to cross, his mother was killed by a landmine belonging to the US Army

When he reached adulthood, Kang founded the Koreans for United Freedom (K.U.F), a terrorist paramilitary organization through whom he smuggled uranium enrichment technology into North Korea from Pakistan in 2002. In 2004, he and his group bombed the British Embassy of Seoul, and were involved in a hostage crisis in Seoul in 2007.

Due to his reputation, he became one of the most wanted terrorists in the world and kept himself under the radar to avoid being photographed or identified by any Western intelligence agency. He also blended into the South Korean government and posed himself as chief of security and primary aide to South Korean Prime Minister Lee Tae-Woo under the name of Park.

By July 5th, 2013, Kang still disguised himself as the head of security and aide for South Korean Prime Minister Lee.

To ensure a reunified Korea, he and former Secret Service agent Dave Forbes took President Benjamin Asher, Secretary of Defense Ruth McMillan, and Chairman of the Joint Chiefs of Staff Joe Hoenig hostage in the underground Presidential Emergency Operations Center in the East Wing of the White House.

Kang ordered the Speaker of the House Allan Trumbull who was now Acting President, to withdraw the U.S. Navy Seventh Fleet and 28,500 soldiers actively defending South Korea to allow North Korea to invade its southern counterpart to end the civil war while also seeking to destroy the country by self-destructing their silo-based nuclear weapons as payback for the untimely death of his parents. To accomplish this, Kang needed three codes from Asher, McMillan and Hoenig that would allow him to activate a highly-classified fail-safe U.S. military protocol called Cerberus. He got two of the codes from Secretary of State Ruth McMillan and Chairman of the Joint Chiefs of Staff Admiral Joe Hoenig. He tried to leave before time after being threatened by Mike Banning but Mike shot up his men from the staircase, killing them and letting McMillan successfully escape and reaching to the soldiers, but Kang escaped back to the bunker in the confusion. Once a helicopter landed on the lawn per his requests, he sent the hostages and two men (all wearing face masks) to the helicopter and had them suicide bomb, to stage the deaths of him and President Asher dying with the other hostages.

Kang managed to crack the final Cerberus code by himself which was set to detonate in five minutes, allowing them to escape into the tunnels under the White House. However, Mike Banning ambushed and killed his men before fighting Kang, but not before the latter shot Asher in the stomach. A brutal hand to hand combat ensued, leading to Mike disarming Kang but being overwhelmed long enough for Kang to draw two knives. Mike disarmed him and, after a short punching march, Kang managed to pin Mike to the wall and reminded him that everything he did failed. However, Mike got him by the shoulder and grabbed him between his legs before snapping his wrist. With Kang immobilized, Mike grabbed a nearby knife and stabbed him through the skull, killing him instantly and fulfilling an earlier promise by Mike to stab him in the brain. Mike then deactivated Cerberus in time, and saved everyone living in America from being killed by nuclear weapons and also saving South Korea from a potential North Korean invasion.

Kang's radical plans for Korean reunification never came to fruition as Asher survived his wound and America was saved, thus making his final act a ultimately futile one. With Kang and all of his henchmen killed, the K.U.F. was no more and Mike Banning was reinstated to the Secret Service. His death by Mike also avenged all those killed during his assault.

"I don't need to launch them. The explosive force within each hardened silo will detonate the missiles. Tens of millions of Americans will perish. Your country will be a cold, dark nuclear wasteland. Now, too, America shall know suffering and famine."
―Kang reveals his true plans to the President [src]

Kang Yeonsak was a violent and callous psychopath with all of the signs: violence, grandiosity, high intelligence, incapacity for remorse, a complete lack of empathy, sociopathic methods of thought and extremism. He was powerful, resourceful, predictive, ruthless, arrogant, self-assured, confident, sadistic, and highly intelligent to the point of megalomania. Kang was also vengeful and devotedly obsessed with revenge against the United States for the deaths of his parents, to the point of fanaticism for Korean liberation. He was also sophisticated and enigmatic, showing extravagance on the subject of speech, clothing, methods of movement and he was extremely unpredictable.

He showed no regret in massacring hundreds of people during his attack on the White House. Kang had incredible technical knowledge, able to predict how the U.S. missile codes were changed daily and able to commandeer immensely complicated technologies such as the Cerberus fail-safe protocol and the Hydra 6 air defense system, during the course of the film. He was completely ethical and subtle, carrying out his plans only once they were fully calculated, both risks, strengths and weaknesses. Kang was also manipulative, able to impersonate as the head of security and aide to Prime Minister Lee, and also recruit Dave Forbes, a former federal agent, to his cause. It is confirmed that Kang suffers from a narcissistic personality disorder and suffered from a superiority complex, as he believes himself to be invincible in the face of his enemies. However, his behavior caused Forbes' loyalty to waver and he later proclaimed to Mike Banning that Kang was insane.

Although it is unknown where he received training, Kang was extremely skilled in unarmed combat. Although, at first, it appears his only weapon is his genius-level intellect, he defends himself brilliantly against Mike during their climatic fistfight. He showed proficiency in king fu, jujitsu, taekwondo and judo during the fight, also capable of impressive acrobatic and gymnastic feats despite his age, mentality and the injuries he suffered during the fight. He could also overpower the President, but to be fair he had a gun in his hand. Kang's signature weapon was a flick knife, two of which he carried during his fight with Banning. His fighting style suits his intellectual genius, sadistic tendencies, and the advantages of his age. He was also skilled with a handgun, shown during the resolution of the White House Siege.

However, his arrogance and overconfidence caused his downfall as he underestimated Mike by gloating about Mike's previous failure of saving First Lady Margaret Asher, proclaiming that he would fail to save the President as well. When he believed he had triumphed over Mike during their fight, gloating him with "Looks like you fail again, Mike". These words and being momentary distracted allowed the motivated Mike to finally overpower and kill him.

Kang Yeonsak was portrayed by Rick Yune in Olympus Has Fallen.

Profile Dossier for Kang on the official movie site 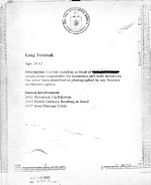 Kang's list of related terrorist acts according to the CIA 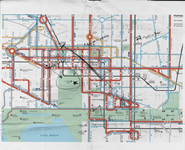