Has Fallen Wiki
Register
Don't have an account?
Sign In
Advertisement
in: Actors, Actors who played Secret Service Agents, Angel Has Fallen actors,
and 6 more

Gerard James Butler (born November 13, 1969) is a Scottish actor who portrayed Mike Banning in Olympus Has Fallen, London Has Fallen and Angel Has Fallen.

Butler and Morgan Freeman are the only actors who've appeared in all 3 films of the series.

Butler is known for his role as King Leonidas in 300. He also acted on films Tomorrow Never Dies, Reign of Fire, Lara Croft Tomb Raider: The Cradle of Life, The Phantom of the Opera, Nim's Island, The Ugly Truth, Law Abiding Citizen, The Bounty Hunter, Machine Gun Preacher, Playing for Keeps and Gods of Egypt. He also voiced Stoick the Vast in the animated movie How to Train a Dragon and reprised the role of Stoick in How to Train a Dragon 2.

Credits with other franchise filmmakers[] 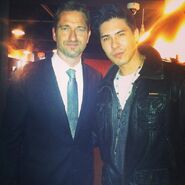 BTS of London Has Fallen 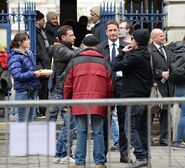